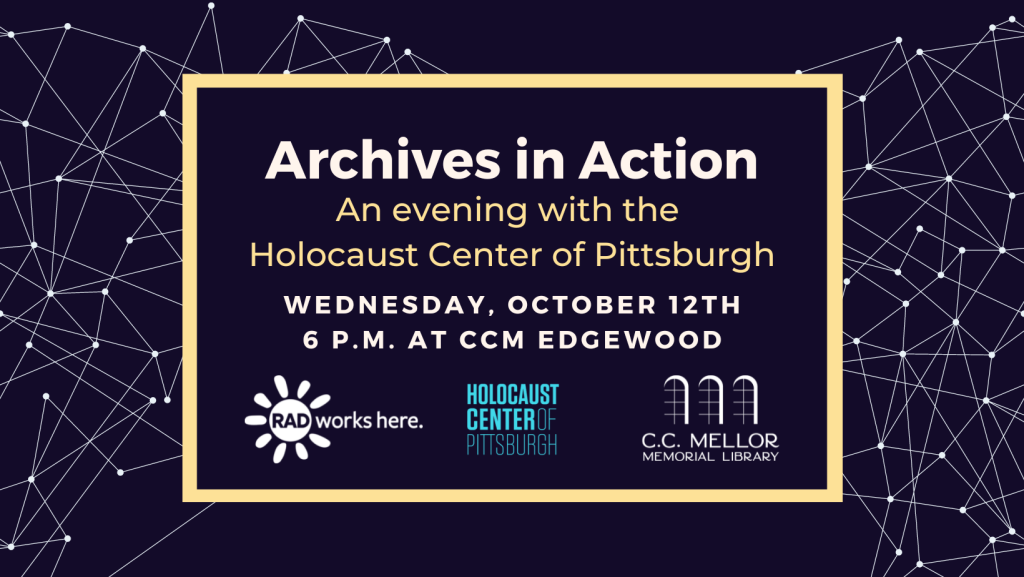 An Evening with the Holocaust Center of Pittsburgh

Join us to learn more about the Holocaust Center of Pittsburgh, how they’re connecting the Holocaust and antisemitism to the injustices of today, and how you can be involved!

Dr. Lauren Apter Bairnsfather, Executive Director, will speak about the various community partnerships and offerings the Center has and ways to get involved.

Marcel L. Walker, Project Coordinator of CHUTZ-POW!, will introduce the Center’s original comic book series that brings local survivor testimony to life. Attendees will learn more about the CHUTZ-POW! Superheroes of the Holocaust series and how they can get copies for themselves and into their local schools.

Dr. Lauren Apter Bairnsfather is the Director of the Holocaust Center of Pittsburgh. While writing her senior honors thesis at the University of Texas, she became acquainted with two Sephardic Holocaust survivors. Inspired by these women, she took an internship in the Photo Archives of the US Holocaust Memorial Museum and quickly became full-time staff. She earned an MA at the University of Chicago and a PhD at the University of Texas. In July 2015, after working in Dallas and Austin, she returned home to Southwestern PA to become head of the Holocaust Center. Under her leadership the organization has extended its reach from a regional focus to an international audience, drawing more than one hundred thousand guests to exhibits and programs. She has brought innovation to Holocaust education, defining its potential to address present day antisemitism, racism, and identity-based violence. Dr. Bairnsfather is an Adjunct Professor of History at Chatham University and has been invited to lecture at universities across the country.

Click here to learn more about the Holocaust Center’s digital resources and exhibits.

Marcel Lamont (M.L.) Walker is an award-winning graphic-prose creator and expert in social applications for comic-book art. In 2017, he was voted Best Local Cartoonist by readers of The Pittsburgh City Paper in their annual Best of Pittsburgh poll. In 2018, he was awarded a BMe Community Genius Fellowship in recognition of his work in the arts and related community activity. He is the lead artist, book designer, and project coordinator for the acclaimed comic-book series CHUTZ-POW! SUPERHEROES OF THE HOLOCAUST, published by The Holocaust Center of Pittsburgh. He is also the president of the board of directors for the ToonSeum, Pittsburgh’s nonprofit Museum of Comic & Cartoon Art.

Click here to read more about the Chutz-POW! comics project.

C.C. Mellor Investing In Our Youth With New Outreach Assistant

A ‘new’ look for CCM

CCM is Funded By